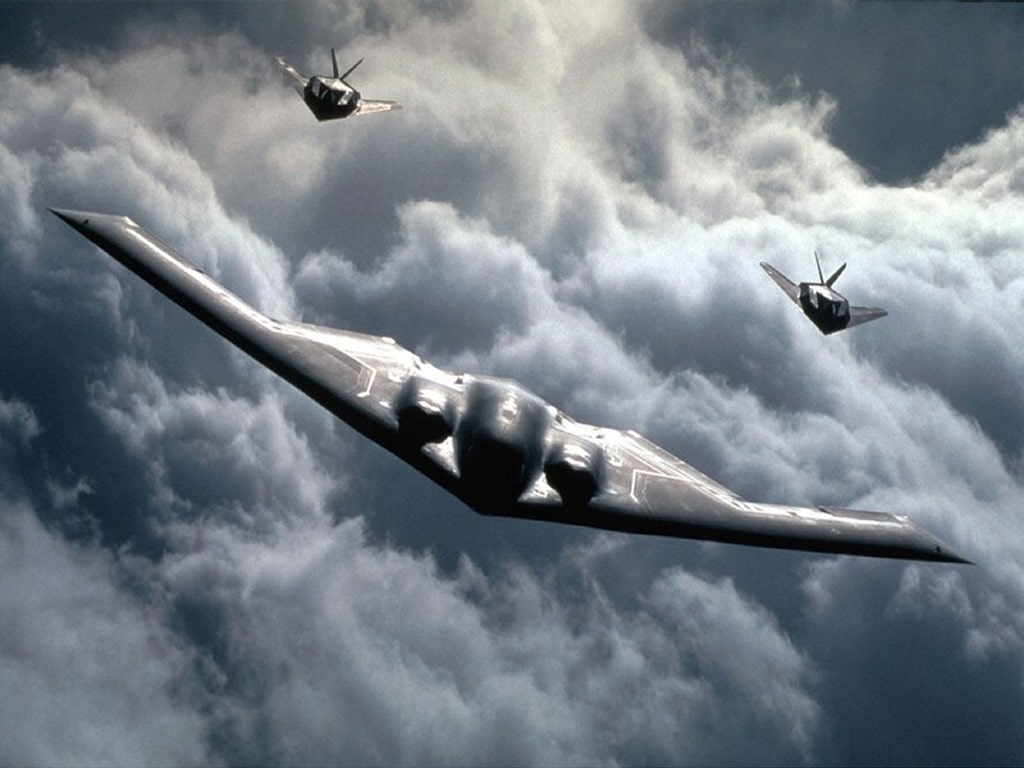 I’ve been reading a book of the Skunk Works (Lockheed Martin’s Advance Development Programs) history, and the story about the beginning of the stealth planes trapped me. This is a tale about spying, project management, applied science, military visionaries, processes improvement, politics and the most famous war night broadcasted on TV.

Let’s start with the problem, a radar. A radar is a device that emits radio waves at the speed of light and detects the energy reflected of these waves by objects, this permits to establish the position and the path of a plane, ship, etc. A simple analogy, are the things that we can see, the objects that we see is the reflection of the light on the objects, so the radar principle is the same, but with beams invisible to our eyes.

Next video shows more on radars (with some jokes). See it on youtube

It was the 60’s, Cold War’s apogee, the massive nuclear missile race production by US an USSR, made the US government to build planes for watching over USSR nuclear facilities, but the soviets were winning the countermeasures for those planes, their radars and the SAM missiles. Planes designed and built by Skunk Works, U2 and SR71 were the highest technology produced in planes that flew hundreds of secret missions but with some disasters for diplomacy, as the U2 shotdowned in the middle of USSR by a SAM.

In the first 60’s, a chief scientist at the Moscow Institute of Radio Engineering called Pyotr Ufimtsev wrote a paper titled “Method of Edge Waves in the Physical Theory of Diffraction”, based on former works of a scottish and a german scientists (James Clerk Maxwell and Arnold Johannes Sommerfeld), one decade later, in 1975, a Skunk Works radar expert, Denys Overholser discovered this paper from a translation of the Air Force Foreign Technology Division, it shows the way to calculate precisely the manner in which a given geometric object and configuration would reflect electromagnetic radiation, in other words the footprint in a radar screen. Ufimtsev made Denys think on how to develop a plane in thousand of flat triangular shaped parts, calculate their individual radar signature and have the total amount aggregated. The new Skunk Works CEO were impressed by this discovery, and put all his efforts in sell this technology to the US Pentagon. In those days of discovering new Cold War efficient planes, Pentagon had the B1 bomber program developed by Rockwell as the new weapon for air supremacy but the realized that the USSR countermeasures would be a nightmare for years. 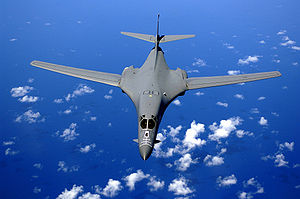 Photo: a Rockwell B1 bomber.

From Deny’s theories if they took a B52 bomber radar signature, the new plane developed with flat shapes will have the signature of an eagle’s eye ball. Amazing. That soviet scientific did not know what achieved, in fact, the study were not considered and placed in a drawer. You can see more of Ufimtsev and his thrilling story (he was “recluted” by US giving him a college job at UCLA) in the following video.

So the stealth plane began to be designed internally at Skunk Works, that squared and diamond shaped plan could not fly, said the aerodynamicists and engineers, it was a total design sin. The drag-lift ratio (the basicc forces that make a plane fly, someday I will post about how a plane fly), it was flat shaped beacuse the 70’s computers had not to much power and memory to calculate rounded shapes, you can see this enourmous different in the B2 bomber and the F117 (first photo of this post). The Pentagon, finally interested of the new Skunk Works technology and set a mock’s tests in 1976 at New Mexico with a competiton between Northrop and Lockeeed Martin’s Skunk Works. The Skunk Works wooden mock had a radar signature of a golf ball, ten times better than Northrop’s mock. Nobody believed that, so the Air Force ordered two propotypes to Skunk Works to make them fly and be tested. It was declared the most Top Secret project in history, as the Manhattan nuclear bomb project. The next picture shows the mock in “action”. 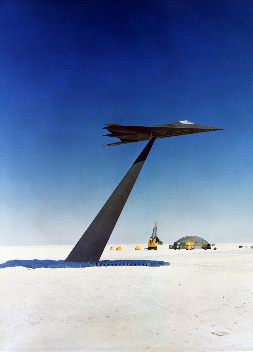 The budget were very stern, 30 millions of dollars (3 o 4 times less). They built both planes in a record time of 20 months, because of low budget, they took parts of other Air Force planes (provided by Air Force), the flight computer control of a F16, the B52’s navigation system, F18’s head up displays an other parts from F111 and F15, those parts represented the 10% of total parts needed. So the maiden flight took place on the first of december in 1977, and that flat plane flew, it was a success. After month of stealth testings, one of them, were to fly right next to a E3 AWACS at full beam radar power and they did not detect anything. Later, Ben Rich (Skunk Works CEO) told to the National Security Council, Zbigniew Brzezinski how to express to President Carter the achieve the made. “Tell President Carter that this plane changes the way the air wars will be fight from now on, and it cancels all the tremendous investment by Russians have made in their defensive ground to air system. We can overfly them any time, at will” That 30 million dollars little program cancelled the massive investments of thousands of millions of dollars and worries of the US Cold War side. Three weeks later the B1 bomber program were cancelled. The stealth program were so secret than in the presidential campaign between Reagan and Carter, Carter had to admit the error, accused by Reagan, of the B1 bomber program cancellation in order to hide the stealth program.

So the program followed with the final sign of the contract in the first of november in 1978 with the commitment of the first plane delivery in july 1980. A few days before the signing of the contract, the alarms fired, in a stealth test, the plane returns a signal so high that the plane were detected at 50 miles, they discovered that there screws extended above the flat panel only by 3mm. It was a new way to build planes with maximun precision, maximun secrecy, and with very very tight deadline, so they built new engineering processes, new procurement agreements, everything were new. The deadline were not achieved, it took a year to deliver the first maiden flight, on 18th June of 1981, the Ben Rich’s birthday, date selected by his team in tribute of his boss (he suffered a lot of pressure in 1980 and lost his wife in the summer of 1980, when they had to deliver the first plane). It was a total success. The rest of the story is known. Reagan won the election (and concerned about the F117), the USSR collapsed and the F117 started the Baghdag strikes on the Desert Storm Operation 1991. The F117 that represents the 2% percent of the total allied aircraft in Desert Storm Operation in Iraq War, destroyed the 40% of the total of the war objectives. The stealth capabilities were expanded to other planes B2, F22 and F35 (see the dedicated posts Part I, part II and part III in this blog). One of the F117 were shot down in Balcans War.

The F117 in “action” over Baghdag on january 17th, 1991. This plane, and its history, were the reason of the “Breaking News” that historic day.