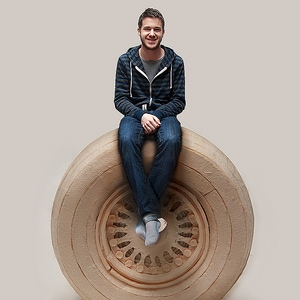 “Where technology meets aviation.” This is the aeriaA’s motto, but not all the technologies are binary data, aerodynamics and fluid dynamics, electronic, etc. Across the mankind history every significant period had it revolutionary technologies, and once the paper was one of these advanced technologies. Before showing this outstanding project, on of the main reasons of writing this post is a comment I read about this project. “What a pity, so much ingenuity and time wasted for nothing” I tried to understand this comment and where was the wasting stuff. Where others see waste work I see talent, passion with a lot effort and meticulousness. Returning to the issue, this is about an impressive combination of the papyrus/parchment and a Wright Brother’s Flyer descendent technologies, a full Boeing 777 made of paper in 1:60 scale, but do not miss the view at the big plane, please see the details, details as mechanics on paper. After thinking how to focus this post, I thought, why not ask to the author? Here you have our conversation and the great pictures and videos he took.

Luca Iaconi-Stewart is the author. You can see his Flickr album and Youtube channel with a lot of photos and videos.

[aeriaA] Tell more about you, where are you from? Are you studying or working? Do you want a future around aviation?


[Luca] I’m from San Francisco and have lived here most of my life. I went to Vassar College (in New York) for two years before deciding to leave (though not because of or for this project). I work on the side in addition to working on this project, though I’m excited to move on to the next big thing… as for what that might be, I’m not sure, but it could very well be something aviation-related! We’ll see…

[aeriaA] When started your passion about aviation and why?
[Luca] I think traveling as a kid inspired me. I’ve been interested in aviation for over ten years… maybe the fact that the planes somehow manage to fly? It still boggles my mind.

[aeriaA] Why did you start the 777 model and why in paper?

[Luca] I took an architecture class in high school and we built simple models from manila folder before moving on to the final versions. I really liked the way the paper felt, and how easy it was to use, and I guess that led me to start this project. I also wanted to challenge myself and see how far I could take this concept, and I here I am still working on it after 5 years![aeriaA] Why did you choose the 777 and the Air India livery?
[Luca] I realize beauty is subjective, but I think the 777 is a very beautiful plane, especially the -300ER. The large engines are a nice contrast to the very long and sleek body. I love the way certain parts look too—notably the tail section, the engines (the fanblades), and the raked wingtips. I know there are plenty of people who think the 777 is boring because it’s a twinjet (and because it’s so ubiquitous these days), but I think it’s a very nicely proportioned plane.
As for the livery, it’s elegant and modern at the same time, which is rare in this age of simple eurowhite paint schemes. I also found a very detailed seatmap online that showed Air India’s interior configuration, which made it easier for me to design the cabin.

[aeriaA] Did you finish it?
[Luca] No. I still have to finish designing and building the wings and the main landing gear. I expect that I’ll be done sometime over the summer, but it’s hard to know exactly.

[aeriaA] Do you have original blueprints for the model, what do you use for that?
[Luca] No, I unfortunately don’t have the CAD files. As far as I know, they’re considered trade secrets and are not released publicly by Boeing. However, I do have the general exterior dimensions (from Boeing), the training manual (which has over 6000 pages of detailed diagrams), and the seatmap from Air India, in addition to hundreds of pictures, so I’ve been lucky in finding information about the plane.

[aeriaA] What kind of paper are you using? What are the basic tools do you need for build the model?
[Luca] I’m only using manila folder paper, though I have two different thicknesses available, depending on the part I’m making. I use an xacto to cut the parts, a toothpick to apply the glue, various rulers and triangles to help with cutting, and occasionally bottles to help roll and form the paper.

[aeriaA] How about the mechanical parts as cargo doors, main doors, etc? How did you make the moveable parts?
[Luca] Over time I’ve gotten better at making moving parts—it’s all a result of practice. I generally know what will work and what won’t, and I try to avoid making stupid design decisions (e.g. building a part that’s too small to cut out). I design on the computer in Adobe Illustrator, but it is hard to figure out moving parts cause I’m doing everything in 2D, so a lot of times it’s just pure luck.

[aeriaA] What were the most difficult challenge during the process?
[Luca] Any component with moving parts is hard, as are pieces that have unusual shapes. The engines, unfortunately, have both, so they were the most difficult to design and build so far. The wings, once complete, will probably overtake them in terms of difficulty.
Other times, something will just take so long that I lose focus, so motivating myself can be a challenge too.

[aeriaA] Had anybody of Boeing contacted you for knowing more about your project?
[Luca] Yes, Boeing was kind enough to reach out to me and I’ll hopefully be visiting them in the near future for a tour! I’m very excited. GE has also contacted me.[aeriaA] Where will the 777 finally placed?
[Luca] I’m not sure at this point, but I’m working on having it displayed somewhere so people can see it in person!

[aeriaA] What do you recommend for other people that want to model a paper aircraft?
[Luca] I’d recommend that they start with something simple and get a feel for the design and build process. Then they can increase the complexity over time. Or, even better, start with a kit or a printable model, so that they don’t have to design it all first. This project started out very simply, and it’s evolved over time as I’ve gained skill. If you find a way to motivate yourself, you can accomplish really amazing things!

[aeriaA] I think this kind of personal projects show a lot of personal values, skills and capabilities, and overall of them, passion and creativity, what did you learn about this experience?
[Luca] As I said a couple times before, I think it’s a testament to how much can be done with sheer willpower and motivation. I wasn’t born with any of these skills, I just found a way to learn and perfect them. I have to say, though, that it’s been a mixed blessing; at times it’s very satisfying to work on, but it can also be frustrating, time consuming, and isolating.

I also think this project is more than just a paper airplane. Many people see it as ‘just’ a model, but it’s really been a learning experience in so many ways: I’ve had to learn about the plane, learn how to design and build parts successfully, learn how to problem solve, to strategize, to reverse-engineer etc etc. The list goes on—but there are many skills involved that don’t seem obvious at first.
[aeriaA] Will you build more aircrafts?
[Luca] I’d love to tackle a larger model in the future, but not anytime soon.
[aeriaA] Thanks a lot Luca. [End of conversation].
I think the sentence mentioned at the article’s top  “What a pity, so much ingenuity and time wasted for nothing” has been very well refuted. There is nothing more to say. A secret, I have my own avgeek model, in this case Madrid-Barajas airport in 1:400 (see the article) and I’ve felt as Luca in a lot of his feelings.
For more info:
Luca’s Flickr album
Luca´s Youtube channel
Boeing 777 family. www.boeing.com/boeing/commercial/777family/