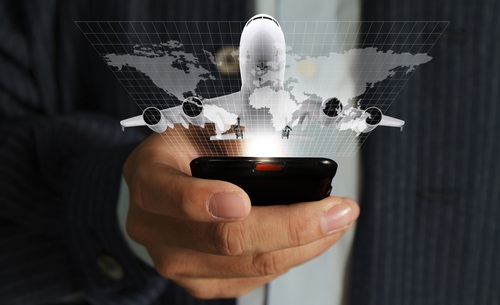 [Article’s update] This article was written at the beginning of 2013, so since the Personal Electronics Devices are allowed since 2014, I update this post with a new section at the end of it.

Few years ago I started a new university degree in Telecommunications, more than ten years after I finished Computer Sciences. As I’m mixing aviation and technology topics in this blog, I remembered few days ago that I did, in 2011, a brief writing about Mobile Communication at Aircraft (MCA onwards), and I would like to share with you now.

“Please disconnect all your electronic devices during the take off and landing and please switch off the mobile phones including the flight mode”. Is it all about electromagnetic jamming? Let’s view some basics principles:

A little of Physics.

When a wave travels by air, it looses energy/force due to several causes:

The mobile frequencies, around 1-2 GHz, we only consider the distance and the reflections looses. We can calculate the wave propagation through the air, (let me a little of maths)

The Received Power, RP (the signal) depends on the Transmitted Power, TP (by antennas), the Transmitter Gain, TG (antenna’s power output) and the Receiver Gain, RG (antenna’s performance sensibility), the distance, d, between them and the signal wavelength (λ = c / f) where c is the speed of light and f the frequency.

So we can infere that the signal power loose is proportional to the distance’s square and frequency’s square. It was only maths, don’t worry, a human shout, that has its frequency will be hearing less and less depending on the distance and if it is shouted by a tiny woman’s voice or by a rude man’s voice. This is the very simplified concept.

This the european mobile specification, yes I know that we are in the era of UMTS and so on, but it is important to know one basic aspect of GSM protocol to understand the MCA (after several paragraphs I finally start to mention the MCA, please have a little patience). If you want to know more, look for GSM at Google, Bing, etc. The important aspect of GSM is that it is set in the protocol the power and the frequencies that a cell (or transmitter) forces to the cell phones to connect, it is not the same use the cell phone in the opened and wide plains of Castille (Spain) than in the mountains density of Switzerland, and it is not the same to be at 100m of an antenna than 10km. This understanding is basic for the MCA operation inside an aircraft and its electromagnetic safety.

We don’t need too much distance to provide service, in an A380, the cabin has 80m long by 9m height and 7m width, so the radiated power is low comparing with a cell antenna with 1000W of power than an antenna that emits at 3W, this impacts on the legal normatives of the minimun distances the antennas must be positioned to avoid schools, hospitals, etc. This is the concept of the Equivalent Isotropically Radiated Power. (EIRP) Calculating it, we can trace an “exclusion” sphere aera where the signal power is emitted. The formula is simple: the distance depends on the antenna output power (gain), the frequency and the sphere area.

The EIRP is important because the european normatives sets the EIRP and through it the frequencies, the power and the distances.

Since the fly-by-wire systems controls every commercial aircraft, the aircrafts have been populated by electromagnetic sensors to detect the flaps and slats position, primaries and secondaries flight control computers, auxiliary computers, GPS, VOR and ILS communications, electronic centralized aircraft monitoring screens (ECAM at Airbus), etc, etc. All connected by wires lengthwise and across the plane. So the question is how can affect the mobile phones to these systems and communications? Considering the 900MHz and 1800MHz of GSM:

So, these frequencies must not be impacted by mobiles, but, what about the electromagnetic interferences causing by the increase of power sensibility of the mobile phones during the take-off, what about the impact of it in a wire that controls the aircraft’s tail at a distance of 1m, did you ever see the impact of an incoming call with some TV channels or FM tuned stations? I’m not to convinced anyone because I’m a total ignorant of these studies and FAA or EASA reported incidents.

In a non all electric aircraft, you can see the impact of an electromagnetic force on a compass.

The MCA service allows the use of GSM technology mobile on flights from 3,000 meters altitudes.
For its use, the user has to make use of the operator’s network to provide the MCA service on aircraft, therefore this users actually perform roaming calls.
Using this service does not cause radio interference with aircraft systems, so in principle it is considered safety for air operations. This is because, among other things, it is restricted the frequencies to be used and there are very clear guidelines of different electromagnetic power parameters outside the aircraft, the base station and the terminals. Moreover, according to the European recommendation (2008/294/EC), it prevent the connection, at certain frequencies and protocol standards with terrestrial base stations by mobile terminals.

What frequencies are used?

EIRP around the aircraft

As we saw in the GSM point, the EIRP determines the power/energy around the base station’s antennas, a standar EIRP for a 900MHz terrestrial base station could be of 400-500W (half of a microwave-oven). For an aircraft the power of the MCA (at 1800MHz) is about 0.1mW at 3000m of flight altitude to 0.30mW at 8000m flight altitude. This huge EIRP difference protects the aircraft systems of being jammed.

The MCA Systems have 3 main components.

BTS: is the core of communication between the onboard mobile terminals and the ground based stations. In this station is where the mobile terminals are registered in the aircraft from the 3000m altitude, provides voice and data services to the terminals. The base station communicates with the satellite, using a modem that connects with it, which performs the function of link between the aircraft and ground based stations. This forms a picocell base station inside the aircraft.

NCU:  as discussed in previous points, there are clear rules about which frequencies can be used and which not, and its power . This is the main task of the NCU, prevent the access to terrestrial base stations by mobile phones that are onboard, making sure that any mobile transmit anything than through the base station of the aircraft. This is achieved by increasing the noise level enough to block the signal that comes from the ground stations. As cell phones do not receive the control signal (GSM protocol) they can not be registered in the “earth system”, after achieving this, the onboard BTS transmits the control signal for registering the onboard mobile phones.

Please, remember all this the next time you hear the speech about electronic devices.

By the end of 2013 FAA and EASA issues new regulations about the using of Personal Electronic Devices (PED) onboard. These are the new norms about using PED on board.