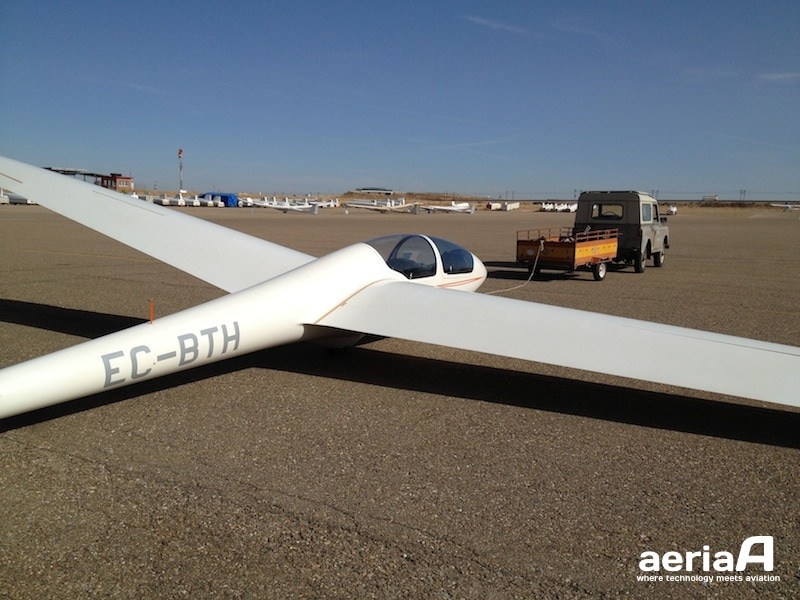 aeriaA as a website about aviation tries to cover all the topics. But there is one basic topic that is the primary reason of writing about airports, technologies applied to them, aviation history, interviews to experts, mobile apps, etc. The reason is that we fly, on a plane, on parachutes, delta wings, whatever, so when I received a course proposal in my mail inbox three months ago I instantly replied to it and I enrolled to an introductory course for learning to fly on a glider. Relatively cheap, without special requirements, and with a pure approach of flying, no engines, only the man, a flying machine and the nature. I reserved my first summer holidays on august, and here is my experience of learning to fly.

In this flying atmosphere, the cooperation among equals, the assistance to your pals, no matter how many flying hours you have, if you are the instructor, the newbie, the expert, the time logger and runway supervisor, it doesn’t matters, you are in, you take part of it and simply enjoy.

I arrived to LEOC near Toledo, 60km south of Madrid (Spain), the day was great, sunny, blue sky, no wind. After doing some administrative course stuff, I was introduced to the instructors, Pawel Kwiatkowski and Pedro Berlinches, my main flight instructor will be Pawel. We reached the main hangar and the first dutie, “here everybody cooperate, take the glider’s batteries, carry with the parachutes, help to move the gliders…” We moved out the gliders from de hangar, by hand, they are big, elegant and light, they are as the huge dog that impress at first sight but afterwards when you touch it he shows you his nobleness.

It’s time to taxi the gliders to the runway, today we use the 29. The best way for taxiing a glider for some hundreds of meters is as the following picture shows.

The above’s glider will be my first plane I’ll fly, the Tango Hotel (from now on it’s named with the two last letters of its Registration, EC-BTH), when we arrive to the runway we started the preflight checklist. To sum up, check that all the movable and non-movables parts of the glider are ok, the general condition of the fiberglass is good, the batteries charged and plugged, the radio in its frequency, the controls operate the ailerons, rudder, spoilers, elevator, etc.

Pawel explained to me all the plane characteristics, the dashboards, every instrument, etc. The next picture illustrates the glider dashboard.

From top to bottom and from left to right.

After the basics, it’s time to fly, I put the parachute and as I mentioned before another glider pilot help in the preflight operations with the towrope hooking it in the nose towhook of the glider.

Canopies down, and the towplane started to move. “Tango Hotel rope tensing” I announced by radio, the rope started to tense “Tango Hotel towing”, the towplane towed us by the 29 runway, Pawel, the instructor, governed the glider, and we suddenly took of a meter above the ground and waited for the tow plane to take off. The glider has greater lift coefficient than the towplane, because its wing width an weight, that is why at the same speed we took off before. And then we were on the air. Respect, that was the first tough I had, Pawel chased the towplane during the climbing, but he said, “the plane is yours, chase the towplane”. I was not be able to chase, that moved a lot, up, down, left, right, I over handled the plane, I could not to coordinate the ruder with the ailerons (¿remember the inclinometer?) The first time it is very very difficult. At 450m above the ground the towplane made us the signal and I released the towrope, we were free flying “Tango Hotel, free flying, thank you.” This sentence represents all, every work done at preflight, the tow job, the chasing and after years of waiting I thanked to other pilot for releasing me and let me fly. 10 more minutes of flying doing simply movements and it’s time to land, “Tango Hotel, tail wind”

We were flying parallel to the runway, and started to turn to the final approach, spoilers out and the glider started to descent, the glider did not speeded below 100km/h avoiding the stall, final approach “Tango Hotel, base” only a couple of hundreds meters and that is, “Tango Hotel, runway 29 landing” we landed softly and stopped at the same point of departure. 15 minutes that put my brain to work, going out of the routine, experimenting something completely new.

“Tango Hotel, free flying, thank you.” This sentence represents all, every work done at preflight, the tow job, the chasing and after years of waiting I thanked to the other pilot for releasing me and let me fly.

30 minutes later, the second flight, the same disaster in chasing the towplane, another 15 minutes of respect, over handling the glider and feel like a duffer. After that flight I tough “what a challenge, since years I need to learn to dominate a machine, a flying machine”. Pawel said to me, this afternoon at 1700 come back, we will look for thermals and have a longest flight. “Longest? Suffering my futility handling the glider? Ok, see you later.” I had to reset my mind during the next 4 hours, that flight must be the best enjoyable thing I’ve done since years.

1700, preflight, we take off, everything were different, the plane flew with other touch, the atmosphere had nothing to do with the previous morning, the towplane released us higher, 650 meters above the ground, and suddenly a thermal, “Oh my God” the variometer marked +3m/s “Hey Pedro, you are climbing faster than your building’s elevator, without engine, only wind elevating a big plane” At this very moment I fell, I surrendered, that feeling joined me to the plane, to the wind, to the views and I enjoyed a lot, as a child. But that was not the only flight surprise… “Pedro, look! Eagles and Raptors over there, let’s go to them”  Would you mind a invisible tower about 100m tall full of birds flying in a perfect circle trajectory gaining altitude? That is a definition of a thermal, that thermal climbed us to 2.670m above the sea level, and 1.900m above LEOC, we were flying as the Nature taught the birds. We then flew and navigated a bit between the near local villages, took another thermal, and then the final surprise. “Pedro, assure your belts harder we are going to do some acrobatics, ok?” I put the belts at maximum pressure, and prepare for roller coaster’s time! (I love roller coasters), we started with two loopings, I’m laughing with the G forces of a roller coaster, that was incredible funny at 1.200m of altitude, I can not imagine what will be 5G forces on a fighter. But we tried two more maneuvers, two spin descents, these was better than the loops, you feel as you are really falling through a hole (an aerodynamic hole where the plan has not lift to fly). We flew back to the runway, and I felt then that was the best different thing I made in my life. 45 minutes of happiness, the smile were endless.

“Hey Pedro, you are climbing faster than your building’s elevator, without engine, only wind elevating a big plane”

The rest of the week:

We had a day with cross winds, other with tail winds, turbulences, etc. I chased much better the towplane, I landed, I took off, it is incredible compared with the first two flights.

I enjoyed with other pilots, helping them at preflight’s duties, taking a lot of photos, etc. I flew with a engined glider, that was a toy compared to a glider, very easy to fly, the last flight’s day I flew with Pedro Berlinches, another great instructor, that make me feel duffer again in my last flight, another humility lesson that the glider flying is constantly teaching you.

Now, I still have some theory classes to attend, our theory teacher Jorge Manchado is great and passionated, one of the best teachers I’ve ever had at any situation. Hearing them explaining meteorology it was a mind pleasure.

Glider Flying Handbook. You can consult it at aeriaA library and download from the FAA.