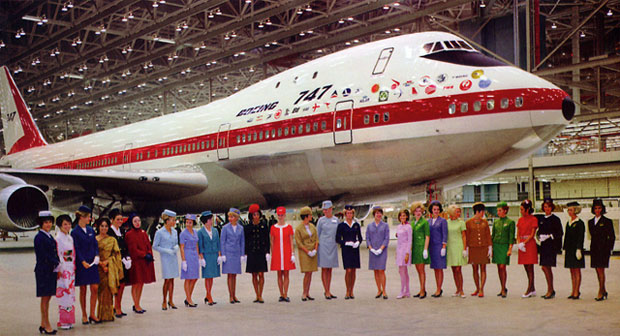 THE BEGIN OF THE STORY.

August, 1965. PanAm asked Boeing for a bigger plane than the successful and breaking plane Boeing 707. In those days the 707 and the Douglas were the biggest airliners with a capacity of 140 seats. But PanAm’s CEO Juan Trippe wanted a 400 passengers plane for intercontinental flights. These crazy requirements for this era were not to far for another craziness project in those years the supersonic, and the really star Boeing’s project funded in cooperation with the US Government, the SST-2707 a 240 seats “missile” up to reach three times the speed of sound and larger than the 747 finally was, it was intended to exceed the performance of the Anglo-British Concorde. The best Boeing’s engineers were assigned to the SST-2707.

The other star project of this year was the recurrent deal “fight” between Boeing and Lockheed, in this case, the military C-5 transport plane, that won Lockheed. Why it is important this? Because this competition had a key success factor, the new engine’s technology needed for lifting the hundreds of tons of the future C-5 Galaxy, the evolution of the first engines, turbojets into the turbofans, quieter, fuel efficient and with a smaller takeoff distance performance. The Boeing-Lockheed “war” was a fight competition between engine makers General Electric and Pratt & Whitney, in this case GE got a better turbofan performance than P&W, so Lockheed won.

It was the first time that a new engine technology, the turbofan, facilitated a new airliner type. In the previous decades the engines were always behind the airliners’ development and design. Boeing learned from the C-5 failed competition and quickly applied to the requirements of the 747.

The SST-2707, the C-5 competition and yet another Boeing project were eclipsing the 747 project, that project were the Saturn V rocket that finally put a man on the moon. Does anybody today wanted to be a Boeing engineer during those years? I do 🙂

The 747 program were formally launched on april 1966, Boeing believed that the 747 would achieve 50 orders as an airliner, they viewed the 747 would have more success as a cargo plane, so they start to design it for passengers and freighter use. They began to design the 747 as a double-decker configuration (as the Airbus A380 is), as PanAm required in the thoughts of Juan Trippe, but soon the evacuation emergency procedures makes them change their mind, it would be difficult to evacuate safely in 90 seconds. So the new proposal arose, a very very wide single decker with two aisles, never seen before. But why they put the bulge at the top? Because its freighter nature and aerodynamic reasons, it was needed for the cargo load through the airplane’s nose. This single-deck configuration in front of PanAm’s specifications, made the young Jose Sutter faced to PanAm’s CEO and put in danger the program. They convinced PanAm with a brilliant and simple solution, a clothesline rope with an exact length of the cabin width, 6,1m, the same measure than the room, at New York PanAm headqurters, were they celebrated the “breaking-news” meeting, that was the double of any commercial plane in those days. The PanAm staff incredulity with that vision needed more evidences so, Boeing built two cabin’s mockups withe the two configurations, the double-decker and the two aisles wide cabin. PanAm people step into those mockups, and the decision were clear, the double-decker were some distressing and not to safe in case of emergency, the single-deck configuration were comfortable as the living rooms, but the commercial vision of Juan Trippe arose again, what was the purpose of the bulk space behind the flight deck? Boeing had in their mind a space for the crew member’s rest area in long flights. “No, no, no, this is going reserved for passengers!” So, this is the story of the characteristic 747’s shape.

As Juan Trippe said, that plane will be “a great weapon for peace, competing with intercontinental missiles for mankind’s destiny” (The Cold War) The measurements were huge, compared with the first series of 707:

You can appreciate the differences in the following picture.

These measurements made Boeing to build the largest Boeing’s plant in 1966, the factory were not completely built when the first 747 were finished inside it.

The 747 were a huge plane to build, and Boeing recognized that they could not build it alone, so the outsourcing came to the scene, and Northrop build a lot of body sections, Grumman (not merged yet with Northrop) the trailing-edge flaps, etc, etc. That was another milestone in the industrial airplane programs, the cooperation between manufacturers.

The 747 project had many difficult moments, anecdotes and innovations:

On september 30th, 1968 the 747 were finally rolled out. The plane were really at 78% finished, but the deserved this moment of glory. The 26 flight attendants, representing the first 26 airlines that bought the 747, broke the champagne bottle and started the final phase of the 747 development phase. The next photo represents the emotion of Bill Allen, the 23 years Boeing’s CEO that retired five months before the 747 rollout, in the exact moment when the hangar’s door opened and the 747 finally showed to the world.

The first flight took place on february the 9th, 1969, it was the “City of Everett” RA0001.  You can see it in this video, please click on the image below. (You will be linked to Youtube). 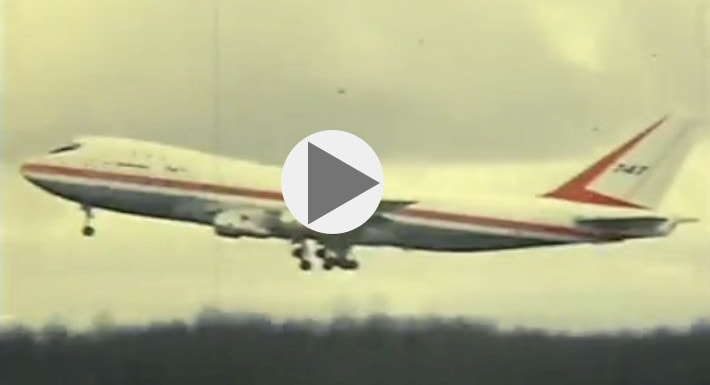 The FAA certification took 10 months, december 30th of 1969 the 747 were finally certificated and the history began. January 21st of 1970 with a PanAM flight from New York to London.

This plane were used as a tanker, as fire extinguishing plane, as NASA’s Shuttle transport, as US Presidential plane, etc, etc. There is no plane like this. Happy 45th Birthday 747!

The following video tells the story very well and it is a very valuable documentary.

Bibliography: 747. Creating the world’s first jumbo jet and other adventures from a life in aviation. Joe Sutter/Jay Spener. Smithsonian Books.