In June 2015, I received a call from a friend of mine and started to ask me questions about who should be interested in my spanish contacts about Safety operations, I vaguely remembered to give tow or three names well-known in our sector not helping too much to my friend, but my friend never asks without a clever reason, never, so I asked him, why? He told me “maybe you would like to meet a person and speak about his project and you could post an article in your website”. This kind of offer I never deny, so he introduced us in a simple email. We met for lunch some days after.

I remembered I called him Javier, not Jorge, I’m very bad with the first person details. We started to speak, and he started telling me his doubts and questions with that kind of curiosity and a low pressure of just validating his idea, at the first sight the idea was so simple and so smart that I’ve only have the chance to say, “yes, it is a good idea…”, “you may be speak with this person…” or “be aware of the air transport and air navigation regulators….” or “..be aware about the low pace of the air transportation tech ideas adoption…”, all the arguments of a person that do not live in the core of innovation but willing to broke. He was confident and told me that he had a couple of high qualified people helping him. The months passing by and we kept the contact and we both agreed to wait for writing something in my website, but the explosion came, during 2016 the awards proved the reason why the fist call and the intuition of Jorge were right.

We finally met again in December 2016. He is Jorge Gómez (LinkedIn’s profile) is the CEO of Canard Drones.

Jorge was taking some beers with a friend, the friend is working in Renewables Energy’s at the Airport’s Operator, Aena, he told Jorge that they had to stop some works in an airport because the NavAids Calibration aircraft had a duty and told Jorge what are the airport’s impacts when the calibration aircraft needs to operate. Jorge had no idea about navaids, beacons, calibrating flights, etc. and he just only suggested him to use a drone. So, Jorge started to find people for validating the idea and Ana Perez came up (Linked In’s profile), she has a huge UAV’s experience at Airbus, and confirmed the value proposition of the idea, and so did Rafael Aguado (Linked In’s Profile), that had a solid background in military radio communications, he brought to the team Juan Díaz (Linked In’s profile).

Canard is duck in french but it is the abbreviation of “Calibration of Aeronautical Navigational Aids using Remote piloted Drones”.

It is not the purpose of this article to deepen in the Navaids, but let me name and introduce the most commonly deployed:

The greater number of red lights visible compared with the number of white lights visible in the picture means that the aircraft is flying below the glideslope. To use the guidance information provided by the aid to follow the correct glide slope a pilot would manoeuvre the aircraft to obtain an equal number of red and white lights. WHITE on WHITE – check your height (too high), RED on WHITE – you’re all right, RED on RED – and you’re dead (too low).

2. ILS: (Wikipedia source) An instrument landing system (ILS) enables aircraft to land if the pilots are unable to establish visual contact with the runway. It does this by way of transmitted radio signals. A radionavigation system which provides aircraft with horizontal and vertical guidance just before and during landing and, at certain fixed points, indicates the distance to the reference point of landing.

3. VOR/DME: refers to combined radio navigation station for aircraft, which consists of two radio beacons, placed together, a VHF omnidirectional range (VOR) and distance measuring equipment (DME). VOR produces an angle between the station and the receiver in the aircraft, while DME does the same for range. Together, they provide the two measurements needed to produce a navigational “fix” using a chart.

The Runway’s navaids, visual aids, radio beacons, etc, need to be calibrated periodically, depending on the national or authority regulation, this can be each a year,  each three years, etc.

There are many angles and perspective of the problem:

1. Operation costs: operating the calibration aircraft is about 3.000€ to 7.500€ per hour, only if the aircraft operator is close to your airport, there are many other examples that this costs are added to an international service, other countries, that can reach 50.000€ for the calibration.

2. Runway uptime, during the calibrating process the runway is closed to traffic, this restriction impacts in two hours of runway’s unavailability. For instance, Madrid Barajas Airport, a calibration day for one of the 18 runways, 18R needs to be calibrated with south winds, it operates with north and south winds, an average capacity of 46 landings per hour needs to low it to 32 landings per hour. Nevertheless, it is normal to operate the calibrating flights during off-peaks hours.

4. Availability, as pointed out in 1, there are a lot of airports around the world but a few Calibrating Operators.

Operating a drone that improves and disrupt the nowadays model. The next photo represents the solution: 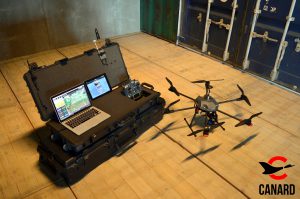 The whole system has the architecture shown in the next picture.

Let’s have a closer look about its components:

Let’s have a look to the drone and its systems. 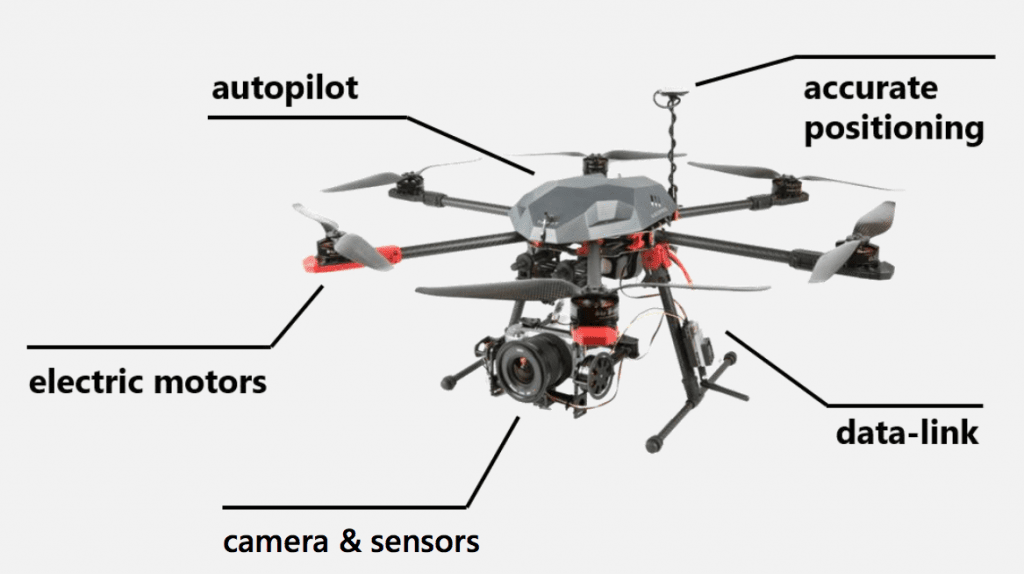 The following video of Aena International shows the nowadays process and services.

In the following video (a Microsoft BizSpark’s promotional video) you can see some footage about the visual aids calibration.

Meteo conditions: the drone can operate with up to 15knots of wind.

Calibrating times: the whole process can be made within 15 minutes instead of up to 2 hours.

The operator set ups the waypoints of the calibrating flight and the drone can do it by itself with no human intervention, in case of  emergency or any other issue the operator can command the drone to a safety zone.

This is the future of navaids calibrating flights. But there a lot to do, they are closing investments, the latest’s one for more than a million of euros for improving the drone’s calibration capabilities, VOR, DME, ILS, TACAN, etc.

There are other scopes for this calibrating platform, apron and taxiways lights maintenance inspections, Offshore oil/gas platforms, seaports navaids/bouys, etc.

2017 will be the milestone for the present and future of Canard Drones, good luck!!