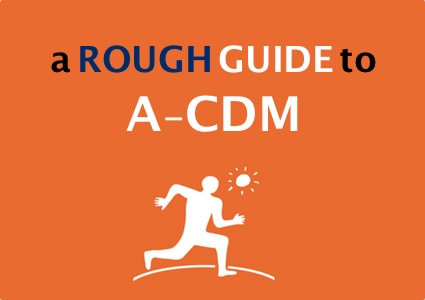 At aeriaA we are trying to address the A-CDM concept from several points of view, interviews at Meet the Expert’s Airtalks interviews (see the Airtalk with the authors of the TITAN Project book, and with Juergen Weder – Neuropie’s CEO), with the free book download of books (www.aeriaa.com/books/titan-going-beyond-a-cdm/), or assisting to interesting events as the Data Science Workshop, etc. So, last week I had the opportunity of reading the first article of Kris de Bolle’s (thanks Kris) new series about A-CDM at the New Airport Insider website. This is the link to the article.

Kris, who works for Brussels Airport Company, introduces the A-CDM subject in a very comprehensive way and let the reader to just focus on the article, no complex buzzwords no complex terms, just explaining an A-CDM first introductory article. The author promised 6 articles about this series.

So I recommend to have a glance to this new promising series about A-CDM.


If you want to know more about A-CDM, you can download the “Bible” of A-CDM issued by Eurocontrol here

About The Author: (Extracted from New Airport Insider) Kris de Bolle works at Brussels Airport in Belgium, Europe’s second A-CDM qualified airport. He’s been involved in A-CDM since the conceptual phase of the project in 2005 and has a thorough operational knowledge of the aircraft turn-around process, A-CDM procedures and requirements, along with an extended network of collaborative decision making professionals and is part of the Brussels Airport A-CDM team. Kris is a qualified ISO14001 internal auditor. You can connect with him on Twitter.

“Imagine yourself sitting at the gate, waiting to embark your flight. You’re early, and you see the aircraft arriving at the stand. It barely came to halt when different rolling stock and teams aim for  the aircraft doors, almost in perfect unison.” Continue reading.

“In this episode, we’ll take a closer look at the project implementation steps every European airport that takes itself and Collaborative Decision Making seriously, implements according to the Eurocontrol A-CDM Implementation Manual , before being declared as an A-CDM airport.” Continue Reading.

Episode 3: A-CDM Concept Elements: Getting linked in with ATC

“….we’ll continue exploring the European collaborative decision making implementation details, leading to A-CDM implementation. Last time, we ended with the variable taxi time element as one of the elements that constitute the collaborative pre-departure sequence. Next in line is perhaps the most challenging step of them all…” Continue Reading.

“Located at the heart of the European Union, and having welcomed 19,3 million passengers in 2013 ,Brussels Airport ranks as a an Airports Council International ‘Group 2’ airport. We sport 2 parallel runways, 25/07 oriented to take full advantage of the prevailing westerly winds, and an intersecting one, 01/19, mainly used to spread the arrival and departure patterns and live up to the strict noise abatement procedures in place.” Continue Reading.

“In the previous episode, we made acquaintance with the stakeholders that were involved in successfully deploying Airport Collaborative Decision Making at Brussels Airport. Let’s now dive again into the 6 A-CDM concept elements and discover how a successful implementation can be approached. This is part 1 of 2.” Continue Reading.

I would like to thank Kris for putting me on the tack of this new series.